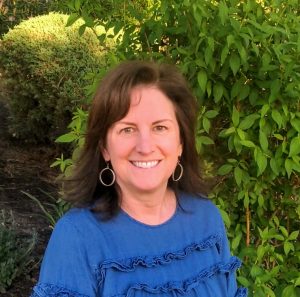 Laurie graduated from Spa Tech in Ipswich in 2006. Laurie gives a deeper, intuitive, therapeutic massage.  It’s relaxing with specific attention paid to areas of restriction, tension and pain. She has over 100 hours of trigger point therapy training which allows her to make lasting improvements, especially when received on a consistent basis.  She really enjoys helping those who struggle with stress, depression and anxiety combined with the ails of too much computer work.  Her favorite areas to work on are the head, neck and shoulders.

Laurie has always had a strong desire to help others but she struggled to determine the best way to do that.  She fell in love with receiving massages while working full-time as an accountant a long time ago.  Receiving massages on a regular basis helped so much with the pain and tension she constantly felt in her neck and shoulders. She was so grateful for her therapist.  When the shock of a cancer diagnosis came at age 30, Laurie felt immediately that she wanted to live more authentically. This eventually led to pursuing a career where she could more directly make a positive difference in people’s lives. Her daughter was very young at the time and part-time massage training was the perfect pursuit.

Outside of work, Laurie can be found spending her time with her rescue dog from Puerto Rico, named Diego, or listening to 80’s British New Wave music.

30% Off Your First Session! Book Now!